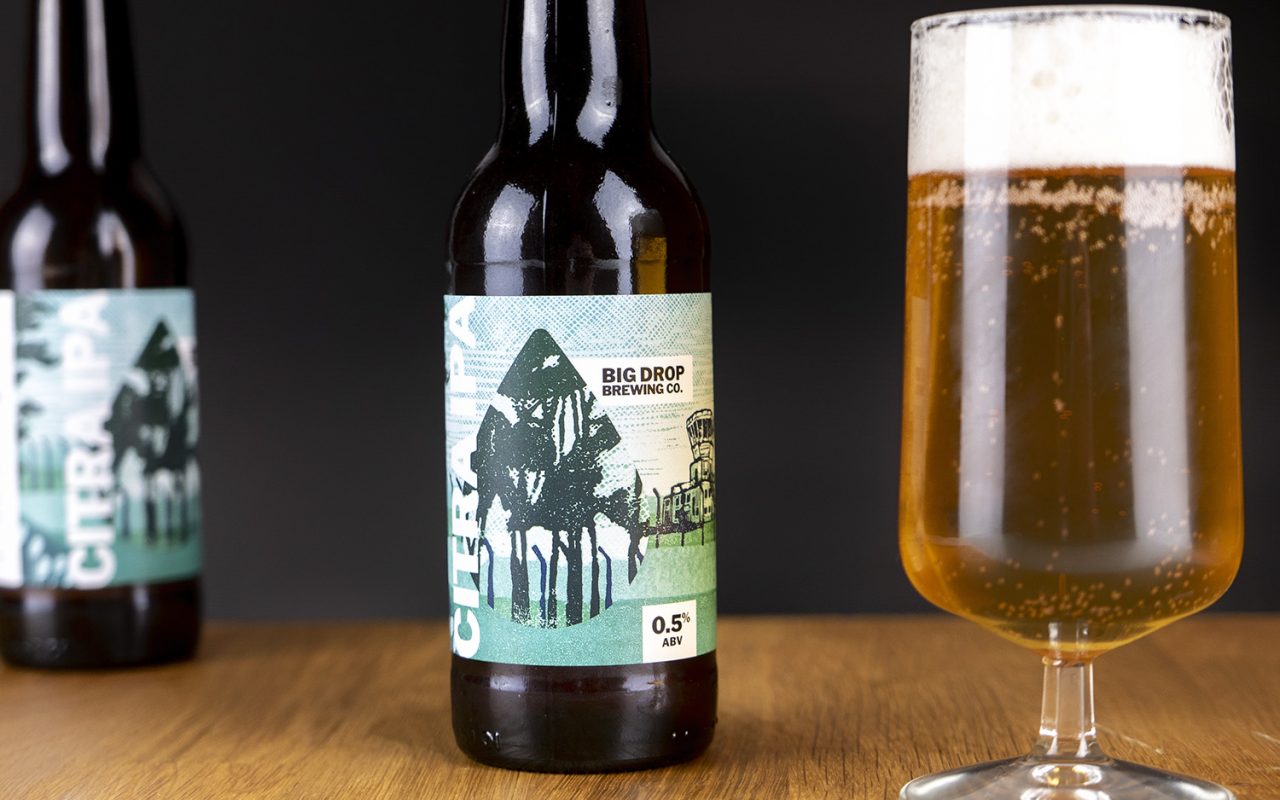 If you want to know a little more about the history of Big Drop Brewing can read our review of the Big Drop Pale Ale, which mentions why Big Drop Brewing was founded. That they are doing well at Big Drop Brewing is clear. The non-alcoholic brewery is now brewing more than ten beers, of which quite a few have won awards at all kinds of fairs and competitions. We liked the regular Pale Ale quite well, so we now want to taste the Citra IPA. Their Stout is waiting here quietly for a cold winter evening.

We said it many times before, but we repeat it again, an IPA appears to be very suitable for brewing non-alcoholic beer. The large amount of hops provides so much taste and bitterness that the alcohol can easily be forgotten. Many IPAs use different types of hops to create a balanced taste. A Citra IPA only uses Citra hops. This American hop variety is very aromatic and mainly gives a taste of citrus and tropical fruit. The Citra IPA from Big Drop Brewing contains not only citra hops, but also three other hops. More Citra Hop is used than in other beers they brew, so it doesn’t seem difficult to predict what this Citra IPA will taste like. Originally this beer would only be included in the Big Drop Brewing assortment for a limited time, but after winning a few prizes, and very good commentary, it has become a fixed value.

Beers that are temporarily in a range are often the result of experimentation. Those experiments are good, but such style studies often result in not full-fledged products, but are intended to test what is possible with certain ingredients. We feared that this beer could be a bit monotonous. The fact that the beer was received very well dampened our prejudices a bit, so we tasted completely unbiased. The beer looks golden with a strong white head. The foam disappears relatively quickly, but not completely, leaving a bit of foam on the beer. That is good, because the beer keeps looking tasty this way.

The smell of the beer immediately reveals that there is a lot of Citra hop present. Fruity, lots of citrus, but also some tropical fruit and mandarin. It also smells a bit malty. The brew tastes how we expected it after smelling the beer. You particularly taste the tropical fruit, with notes of pineapple and mango, but also a lot of citrus fruits. A little sweetness from mandarin and a little sour and bitter from lemon and grapefruit. Furthermore, as with more alcohol-free IPAs, there is a bit of a grassy, ​​dry taste. When drinking you taste some bitterness, but certainly not exaggerated. In the aftertaste this bitterness is more evident and it stays in your mouth for a long time. The Citra hop is clearly the most prominent, but it is certainly not extremely dominating, making the beer well balanced.

The Citra IPA does not contain too much carbonic acid, which ensures a softer mouthfeel. The body is not as full as we expected. Just like in the Big Drop Pale Ale, lactose is added to this Citra IPA to get a fuller body. In our opinion, the lactose does this job better in the regular Pale Ale.

Those who like a beer with slightly sour fruit notes will certainly appreciate this Citra IPA. While drinking, bitterness is less noticeable, but in the aftertaste it is dominant. If you really do not like bitterness, you will probably not appreciate the aftertaste. We want to give one more tip. We ate a brownie while drinking our second Citra IPA and this beer almost matches perfectly with the taste of dark chocolate.