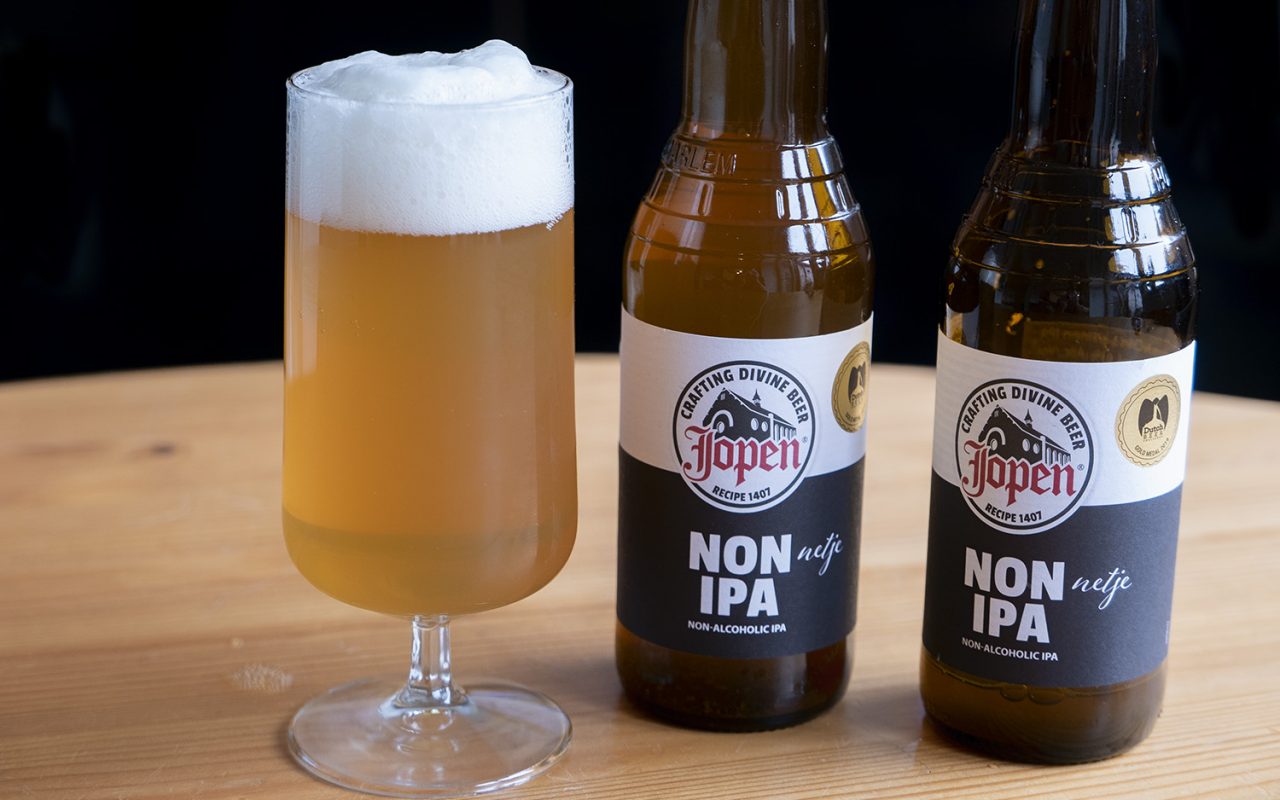 In 1994 the city of Haarlem in The Netherlands celebrated the 750th birthday. In honour of that birthday, a beer was brewed to an old Haarlem recipe. The beer was very much appreciated by the residents of Haarlem, so the brewers decided to start a brewery in Haarlem to keep brewing the beer. The brewery lends its name to ‘Jopen’, these are large barrels where beer was transported over the water in Haarlem in the Middle Ages. The brewery has a very extensive range of beers, including the Non IPA since 2018. This Non IPA is an alcohol-free IPA with a lot of hops and three cereals: wheat, barley and oats.

On the bottle of the Non IPA, five letters (netje) are added to the word Non in a smaller font. This makes this non-alcoholic Jopen a ‘nonnetje’, which is the Dutch word for nun. An alcohol-free beer that, according to brewers, is free from all sins, just as nuns should be.

The beer smells very pleasant, very hoppy, but you also smell a lot of fruit. At first we noticed the citrus scent in particular, but there is also a clear smell of lots of tropical fruit, which makes the aroma a little softer. We notice in the bottle that there is quite a bit of sediment on the bottom. The choice is yours whether or not to pour this into the glass. When you do that, the pale yellow beer becomes slightly more cloudy and the taste becomes a touch smoother. That taste is quite dry and a bit grassy, ​​but we clearly taste the fruity flavours that we could smell before: tropical fruit and a bit of citrus. You can clearly see that plenty of hops has been used. The beer is fairly bitter, but certainly not the bitterest non-alcoholic IPA we’ve already had. The head on the beer is white and abundant. The head disappears relatively quickly, but there is always a bit of foam left, which makes drinking pleasant.

There is quite a lot of carbonic acid present which provides an additional stimulus in the mouth. The beer could have had a little more body, making it even more pleasant to drink. In the aftertaste, first of all you taste the bitters of the hops, after that first bitterness you can enjoy the fruity aftertaste.

This ‘nonnetje’ is definitely a delicious non-alcoholic IPA. Negatives are the head that disappears a little quick and the body that could be a little fuller. Furthermore, there is nothing wrong with this Jopen Non IPA. In terms of bitterness, the beer is just as it should be, the fruity character makes it pleasant to drink, but it definitely does not cause the beer to become sweet. Someone who loves an IPA will certainly appreciate this.