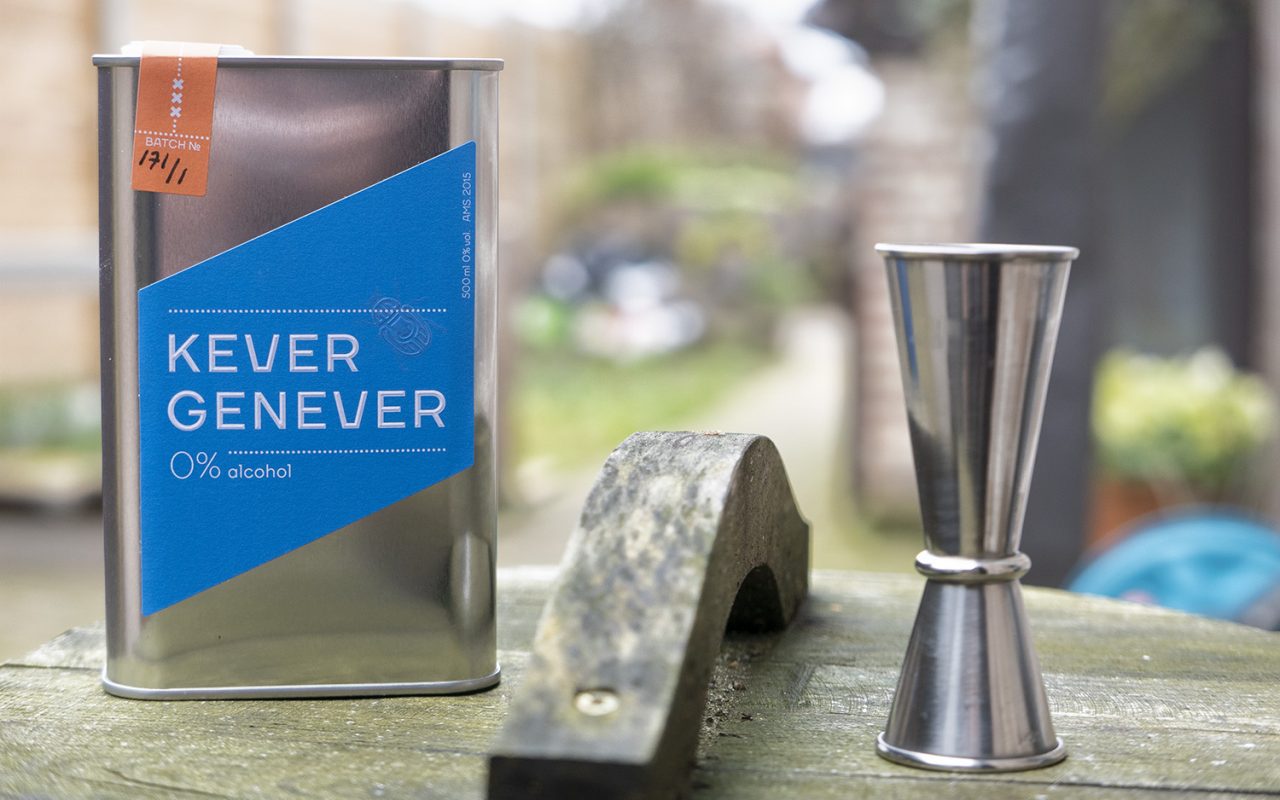 Dutchmen Ruben and Sebastian were drinking a few beers with Dutch gin during a cold night in 2015. That night they were amazed by the complex flavours they found in the old dutch gin and they were sorry that this drink, which was once so popular, has fallen into oblivion a bit. The youth barely knows what Dutch gin is, so Ruben and Sebastian made it their mission to make the Dutch gin popular again. Together with master gin maker Arthur Kruijt, they gave the Dutch gin a modern twist. They christened their drink ‘Kever Genever’ (Beetle Dutch Gin) and sell it in small jerry cans, the kind in which you would actually expect to contain olive oil. Soon they had two types of Dutch gin in their range, recently with the Kever 0% an alcohol-free version was added which we wanted to taste.

The Kever Genever 0% is made based on an Indonesian flavour profile. Not entirely illogical given the history of the Netherlands. In the distillate you will also find lemongrass, cardamom, cloves and red pepper. An infusion with juniper tea should ensure the typical juniper taste.

The aforementioned herbs also immediately stand out when you smell the Kever 0%. You smell a lot of lemongrass with clear notes of cardamom and cloves. When drinking the pure drink we first tasted the cardamom and cloves and then discovered a fresh touch of lemongrass. This citrus flavour is certainly not too prominent, so it never tastes like lemonade. When swallowing you get a slight tingling in the throat of the red pepper, but it was slightly more prominent in the Ginish. It was only when we swallowed that we tasted the juniper. The latter disappointed us a bit, because in a Dutch gin we had expected this taste to be slightly more pronounced. In the aftertaste the pepper lingers a bit, but all the other flavours also remain in your mouth for a while. The taste of the Kever 0% is not very pronounced, so we suspect that we will have to use a lot of it in a mix or a mocktail. The Kever 0% is completely risk-free to drink, because in addition to 0% alcohol it also contains no calories at all. This means that it is completely unsweetened and the flavours of the herbs are fully honoured.

We try the Genever with a neutral tonic and a ginger ale. You can safely use 5 cl in of Kever 0% on 10 cl. tonic to be sure you taste of the alcohol-free distillate. With the ginger ale, the beetle has to do even more effort to put a stamp on the drink. Either you have to use quite a lot of the drink in a ginger ale, or you better use it in a mix with tonic.

We had expected the taste of juniper a little more, but apart from that, this Kever 0% tastes very good. The herbs used are well-balanced, but a slightly stronger taste had ensured that you could use a little less in a cocktail. The ‘beetle’ deserves an extra compliment for the design of the can and the label. As a lover of alcohol-free distillates, this will certainly look great in your drinks cabinet.

More info on this site