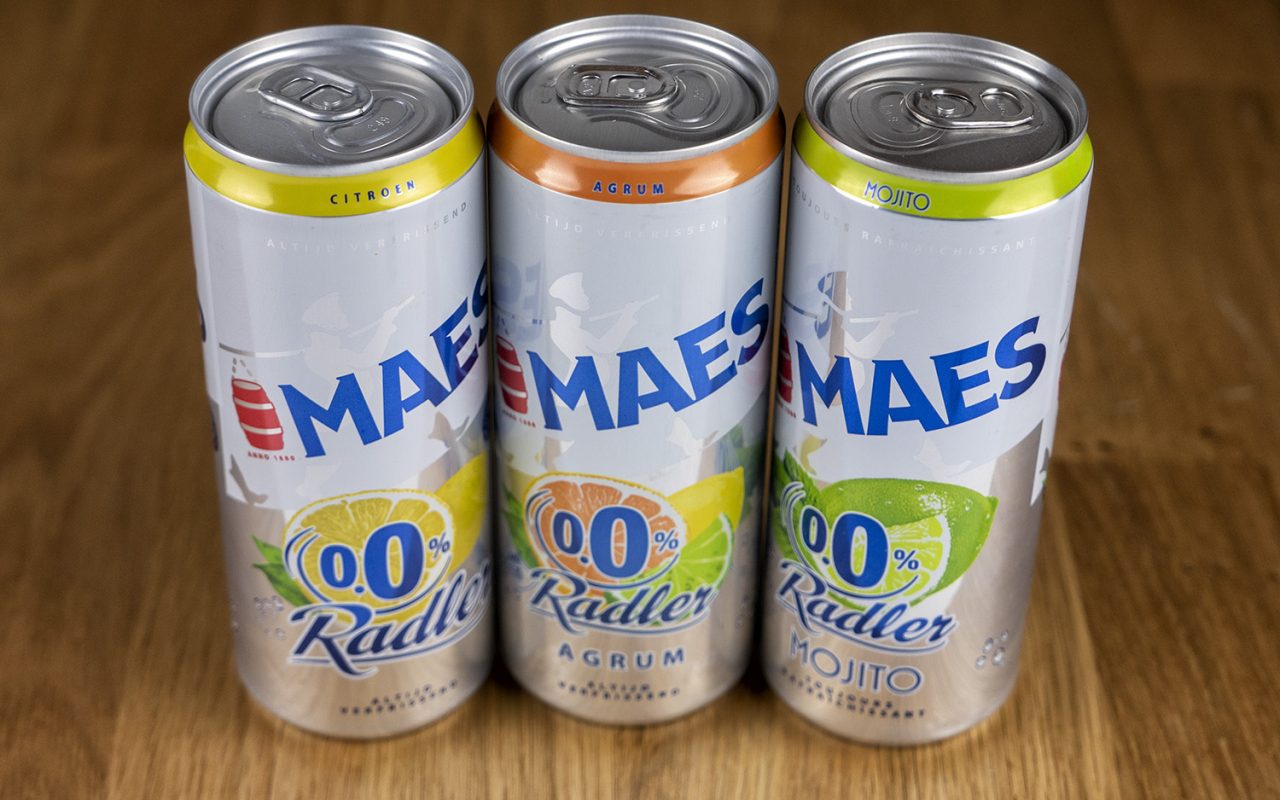 Maes Brewery is one of the largest and most famous breweries in Belgium. In 1880, godfather Egied Maes took over a brewery in Waarloos. The following generations of the Maes family expanded the brewery to become a permanent value in Belgium. There was interest in the brewery and it was taken over by an English brewer, bought back by the Maes family, and eventually a merger followed with the Alken brewery. The brewery in Waarloos closed its doors in 2003, but Maes continued to exist and was brewed in Alken from then on. In 2008 the brewery eventually came into the hands of the Dutch Heineken. A rich history, but do they make nice non-alcoholic beer?

The Maes 0,0, an alcohol-free lager, will be tasted soon, first we wanted to taste the three Radlers. Radlers, as you can read here, are beers mixed with fruit juice or lemonade. With such a mix you can go in different directions. You can use just about any fruit juice or lemonade to make a radler. As a result, there are very sweet Radlers with lemon, where beer is mixed with excessively sugared lemonade. Others are a lot more acidic (and in our opinion tastier) by mixing almost fresh lemon juice with the beer. At Maes they have three non-alcoholic radlers. One with grapefruit (the agrum), one with lemon and an exotic one with Mojito.

A lot of lemonade

We start with the Maes Radler 0.0% Agrum. We want to taste this first because we recently had the Mikkeller Kinder Series and Kinder series Extra, with 1% and 2% grapefruit juice. At the Maes website, the Maes Radler Agrum mentions 1.6% grapefruit juice, so we thought that the taste of this Radler was a bit between those two Mikkellers. To come straight to the point, nothing could be further from the truth. The Maes Radler 0.0% Agrum belongs to the category of super sweet radlers. The beer looks a bit rosy, the head is white. It all looks a bit artificial. Where you taste real grapefruit in the Mikkeller Kinder Series, the taste of this radler is that of sweet lemonade with a hint of grapefruit in the background. The mouthfeel is more that of a lemonade than that of beer. Also the number of calories is, probably due to the mix with a sweet lemonade, on the high side for an alcohol-free beer. Per 100 ml. there are about 38 calories, which is not exactly low.

The second one we taste is the Radler lemon, and we can actually compare it very well with the agrum. You taste the lemon a little better than the grapefruit, but we also have the impression that we are drinking a sweet soft drink. The beer also looks very yellow, without the foam you would think it is a lemonade. We immediately continue with the Maes Radler 0,0% Mojito and have the same feeling all over again. This beer looks, as expected, a bit greenish. The taste is the most surprising of the three. You really taste quite a bit of mint and enough lime, but this too is a lemonade rather than a beer. We can be brief about the aroma. In addition to the sweet smell of the fruits used, these three beers smell like lemonade.

These Radlers are certainly not badly made and there will certainly be an audience for it. On a summer’s day, especially the Mojito and, to a lesser extent, the radler with lemon, can bring a little refreshment for those who want something different than a traditional soft drink. For people who are looking for a more complex beer flavour, these are not recommended.