Fritz-kola: with loads of caffeine 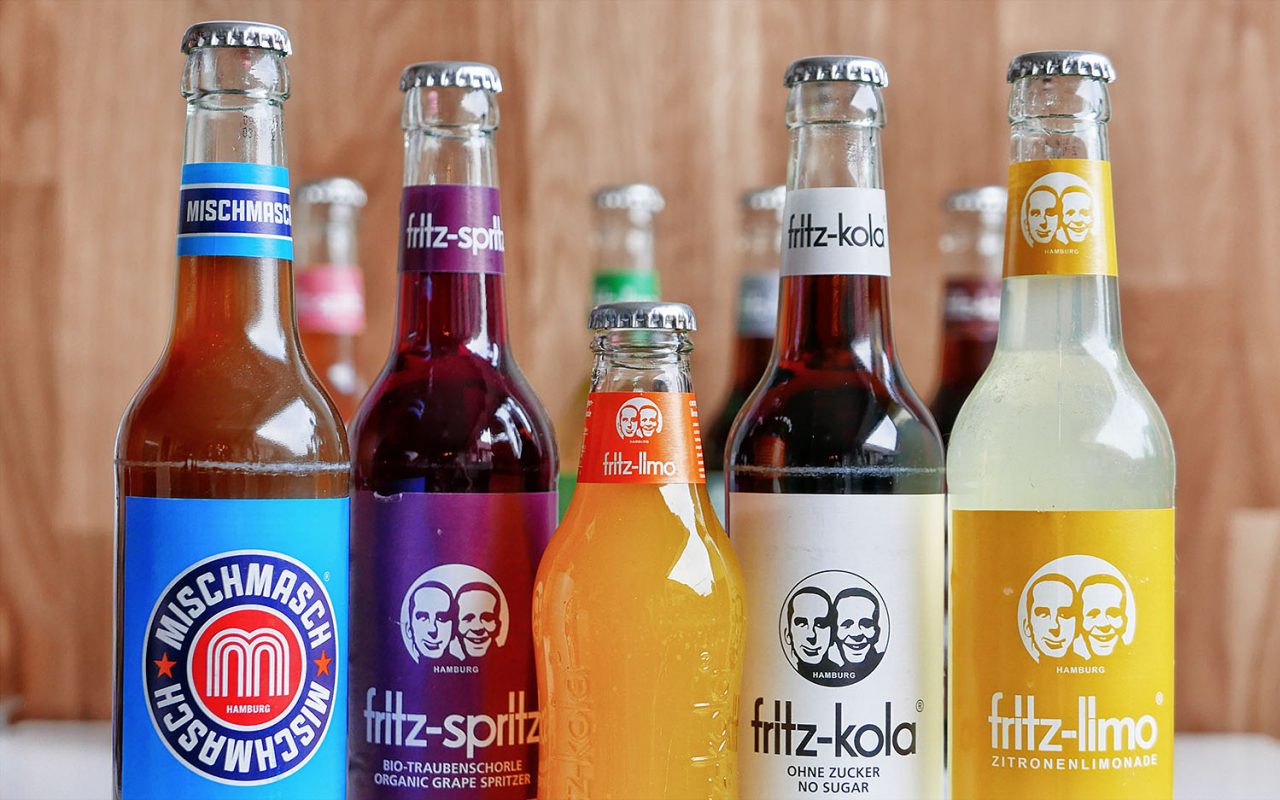 Mirco and Lorenz are two friends from Hamburg who have known each other since their days as boy scouts. From their childhood they made plans to start a business. What they were going to do was initially of minor importance, they just felt that they would be good business partners. During the umpteenth brainstorming session at a kitchen table, with a piece of pizza and a coke, they came up with the idea to create a new brand of coke. The new brand they wanted to create should taste a less sweet than the cokes you could find on the market back in 1999, but it also had to contain lots more caffeine

The two did a lot of research and finally came up with an actual recipe for their new coke. Now they only had to find a name, design a logo and find a partner to brew their brew. Piece of cake, but they were worried about the logo. They absolutely wanted to avoid having to deal with violations of some copyright, so they decided to use a stylized image of their face as a logo. That way they certainly could not have problems with other brands claiming their logo. The name of the coke had to radiate positivity and sound good. A few proposals were made, and after a survey at the local supermarket, the name ‘Fritz’ popped up as the name for their new creation. A very solid, well-coveted German name that leaves no doubt about the origin of the drink.

In the autumn of 2002, the comrades found a company that wanted to brew their recipe on a slightly larger scale. The first tests were done at student parties in Hamburg and the taste was still slightly fine-tuned. In January 2003, 170 crates were eventually ordered. Fritz-kola was officially born. In 2006 a few new flavors were added to the range and fritz-kola was exported to the Netherlands, Austria, Switzerland and Spain. In the meantime fritz also has an assortment of lemonades, a mischmasch (coke with lemonade), fritz-spritz and a fritz-mate. For the moment being fritz is made in 19 flavours.

Why do you want to drink fritz?

You could of course drink Fritz-kola for the high levels caffeine the drink contains. By comparison, in fritz-kola you will find 25mg of caffeine per 100ml, in an ordinary coke this is about 8mg. So yes, you could drink fritz-cola as an energy drink, but the main reason is perhaps because it tastes just a bit different than a regular coke and well, because it’s always fun to have something else to drink.

What about the taste?

Let there be no doubt about it, a fritz-cola tastes different than the colas of the big brands you have known for years. Although there is as much sugar in the ordinary fritz-kola than in another cola, it seems like it is slightly less sweet. The sweetness has apparently given way to a few other flavors. So it seems that you taste a bit more cinnamon and a touch of lemon. Whether you like the fritz-cola better than other cola you will obviously have to experience yourself, so be sure to try it when you’re in a trendy mood. Because, let’s be honest, it is most of all the cool image of the brand that makes it so nice to drink fritz-kola or another one of fritz’s drinks.

You can find more information about fritz-kola and the other twelve fritz drinks on their website. There you will also find where they are available. We will use the various fritz drinks here in the future once in a while when we want to make a trendy mocktail. If you have your own inspiration or a recipe for a mocktail with or without fritz, you can let it know here.