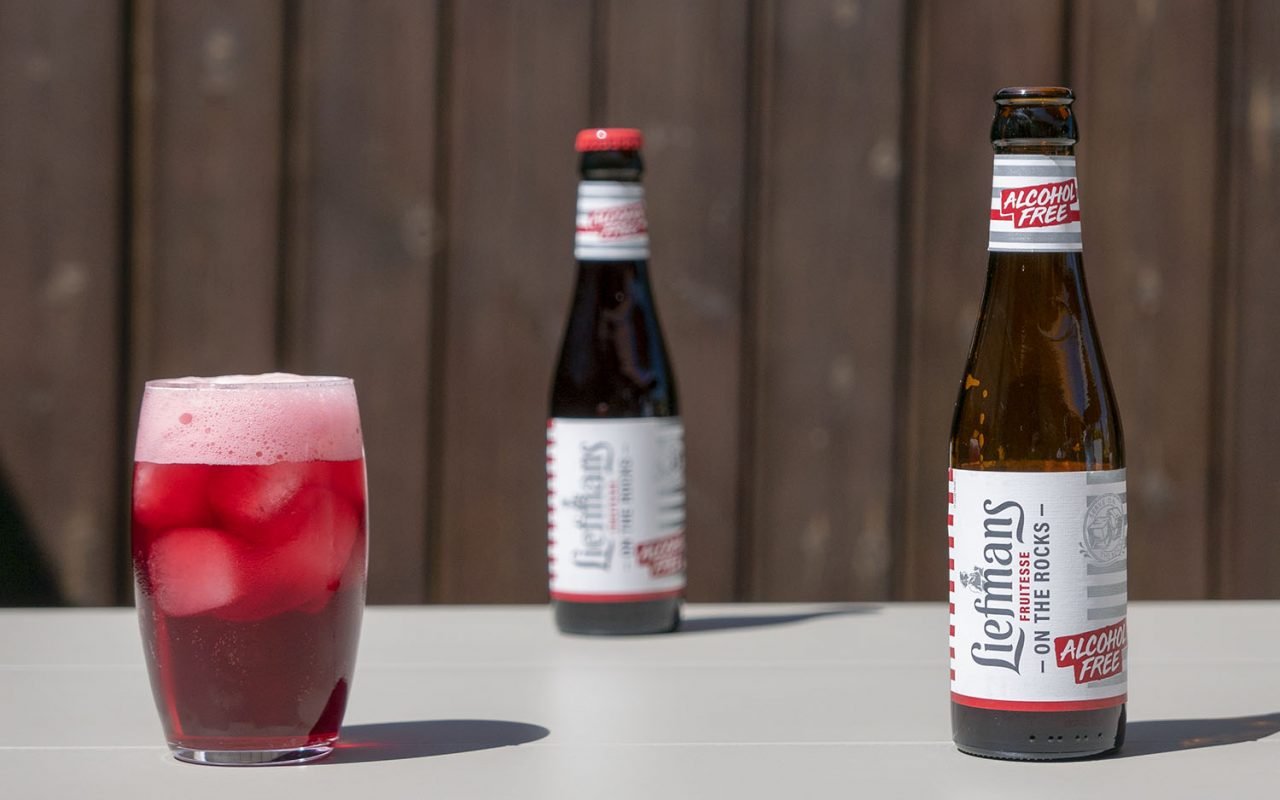 In a 300-year-old building in Oudenaarde, Belgium, you will find the Liefmans brewery. Due to its location on the banks of the Scheldt, this is perhaps one of the nicest situated breweries in Belgium. The brewery has been around since the 17th century and is especially known for its fruit beers. In the beginning, these were made from the surplus of cherries from local farmers, but eventually other types of fruit were also used in the beers. An alcohol-free version of Liefmans Fruitesse On The Rocks was recently added to the range. Of course we wanted to taste it.

The bottle of the Liefmans Fruitesse On The Rocks clearly states that you must serve the beer in an ice-filled glass. This seems a bit unusual, but the alcoholic version of this Fruitesse is already a big success, so it works. On warm days, the extra ice also ensures that your beer stays nice and fresh for a much longer time. When you pour the fruitesse over your ice cubes, it is best to take it easy if you want to avoid an excessive layer of foam. Once the beer has been poured out, the deep red color and the beautiful pink foam head stand out. A bit atypical perhaps, but certainly very inviting to taste it immediately.

Liefmans Fruitesse On The Rocks is made based on different types of fruit. You will of course find cherries, but also raspberry, blueberry, elderberry and strawberry. Because of that abundance of fruit, we thought the beer was going to be very sweet. This was absolutely not the case. The cherries ensure that there is a clear acid present. This preserves the balance between sour and sweet, making the Fruitesse taste very balanced. If you have poured the beer into your glass a little too quickly (as was the case with us initially), you don’t have to panic. You can drink the excess foam that has been created, it is somewhat reminiscent of a delicious fruit sorbet. Because of the color of the beer and the foam, many men will probably shrink back to order this beer, but that is unjustified. On a hot, summery day, thanks to all the ice in your glass, you can not imagine a nicer thirst quencher. Nice for those who are on a diet is that the Liefmans Fruitesse contains barely 21 kcal per 100 ml., or 53 kcal per bottle, which is very little for what the amount of taste get in return.

Summer in your glass

We see this Liefmans as a real summer beer, because we can’t imagine that we would take a Fruitesse from the fridge during the Christmas season. But once the temperatures rises well above 20 ° C, you can serve us a Fruitesse on any terrace. The Fruitesse On The Rocks really brings the summer into your glass.