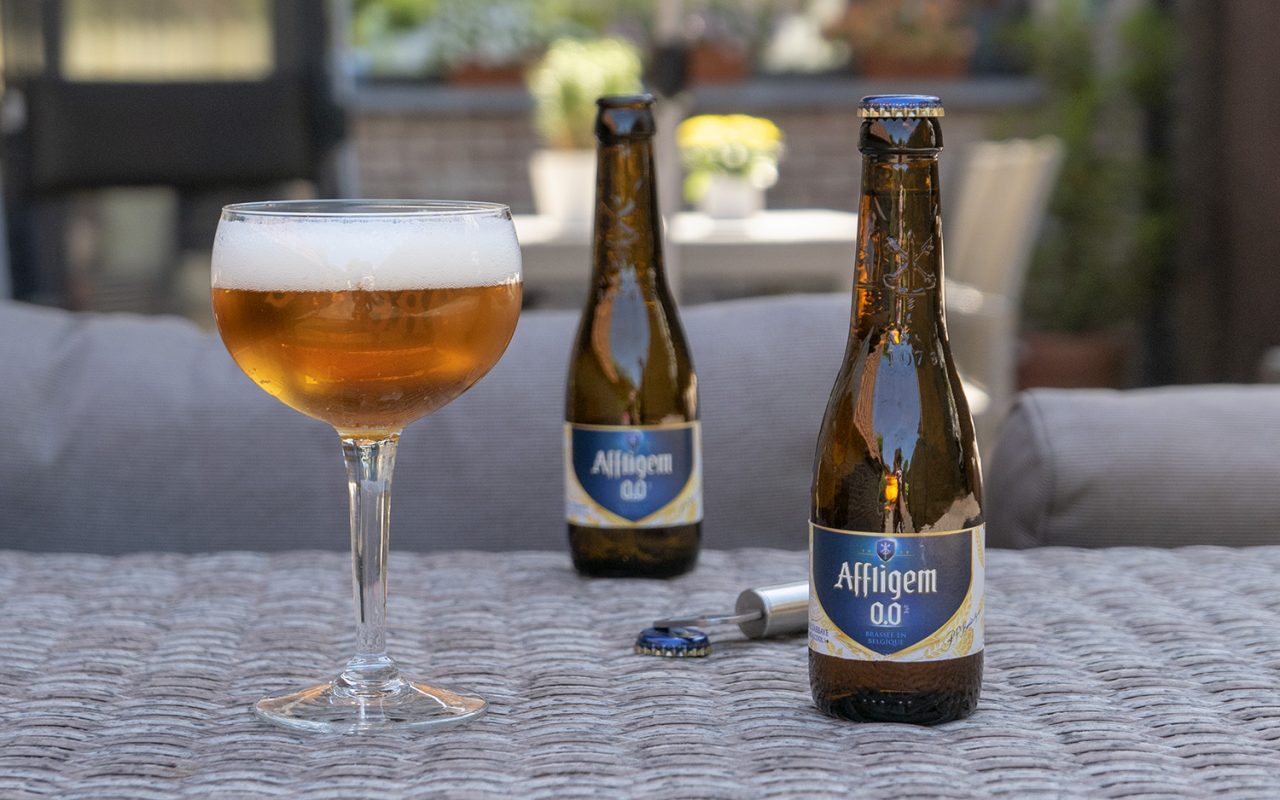 Leffe 0.0 was promoted as the first non-alcoholic abbey beer in Belgium. A second one is added with Affligem 0.0. Affligem is part of the Heineken group, which with this Affligem 0.0, will pick up the glove to battle with the Leffe 0.0 from Inbev. As Heineken is also a sponsor of the UEFA Champions League, it would not surprise us at all if there were some advertisements for the non-alcoholic Affligem next season during Champions League matches. Alcohol advertising during sports competitions is not longer appreciated thes days. Affligem 0.0 is currently only available in France, but this may change soon.

Affligem 0,0 is only available in bottles of 25 cl., which we find a bit of a shame. You want to be able to enjoy such an abbey beer a little longer than a regular beer, so it would be nicer to have a 33 cl. bottle available. Furthermore, most of our beer glasses that are suitable for drinking an abbey beer have a capacity of 33 cl. and the smaller bottle just does not fill that glass, which looks a bit silly. You can of course drink a second one, the chance of a hangover afterwards is non-existent.

No watered down version

Many breweries have stormed the market of non-alcoholic beers. Some prefer to give their non-alcoholic beer a completely new name, others make non-alcoholic variants of their existing beers. In the second case, there is always a bit of a fright that the non-alcoholic double will be a watered down version of the beer with alcohol. That used to be the case more than once in the past. This Affligem 0.0 is certainly more than this. The golden-yellow beer looks good, has a full white foam head that is preserved for a relatively long time and smells pleasant.

In terms of taste, this may not be the best non-alcoholic beer we’ve already had, but it certainly doesn’t disappoint. The beer has enough body and the taste of malt dominates. You taste a little hop, but not enough to make the beer really bitter. The caramel and taste of banana make the beer a bit sweet and somewhat syrupy, which ensures a firm body, so that it never looks like you’re drinking an aqueous beer.

We have already drank more surprising beers with a more pronounced taste and character, but all in all, the Affligem 0.0 is a nice addition to the alcohol-free range. Since Affligem is very easily available in numerous catering establishments, it can be expected that this Affligem 0.0 will soon find its way to numerous beverage cards, and that is of course something we can only applaud.

Summary A nice addition to the alcohol-free range. Affligem 0.0 will hopefully be available in many places soon.