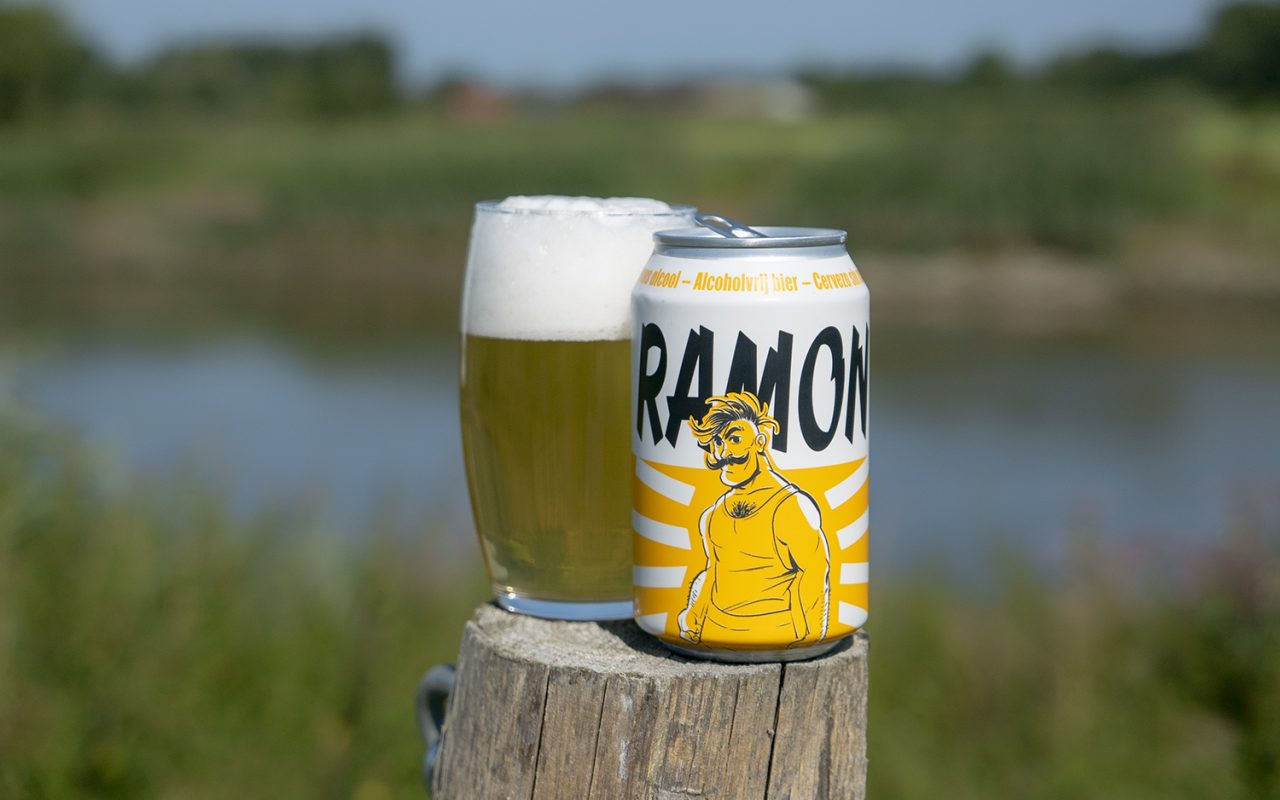 The Roman Brewery in Oudenaarde is located on the banks of the Scheldt and is therefore probably the nicest situated brewery in Flanders. This family brewery has been around since 1545 and is currently best known for some special beers such as Sloeber and Gentse Strop. There are also numerous cafés that serve Roman Pils in the area surrounding the brewery. They used to produce an alcohol-free and low-calorie beer with the Roman Alfri,  but this is now no longer in their range and at Roman they did not make alcohol-free beer for quite some time. This recently changed with the launch of Ramon, an alcohol-free beer that is only available in a can.

The can of Ramon stands out, that’s the least you can say. Bright yellow and flashy, with an image of a tough hipster as eye catcher. The can suggests that this is no ordinary non-alcoholic pilsbeer and that is correct. At Roman they have chosen not to make a copy of an existing beer to produce their non-alcoholic beer, but they are launching a new product. Only available in cans because you have to be able to drink it anywhere, anytime, from a glass, but also simply from a can, as a thirst quencher or after exercise. Whether the Ramon is brewed on the banks of the Scheldt is doubtful. The can states that the beer is brewed under the responsibility of the Roman brewery. We don’t know which brewer makes the beer, but Roman wants to put it on the market under his own name, which shows that they are convinced of the product.

If you open the can of Ramon you can smell a little hop and citrus which confirms that this is a fresh beer. We drank our first Ramon out of a can to get some refreshment, without paying too much attention to the taste and in that thirst quenching Ramon succeeds with verve. It is a fresh beer that you can easily drink anytime. At Roman they say that the beer is suitable for drinking after a sports performance and that is certainly not a lie. We can imagine that a Ramon does its job perfectly after a bike ride or a brisk walk. We drank our next can from a glass and we saw for the first time what the bright, pale yellow Ramon looks like. The color of the beer fits perfectly with the can and you can almost feel that it is a fresh beer. The foam is pure white and stays surprisingly long on your beer. In terms of appearance, the beer is reminiscent of a wheat beer but without being cloudy.

We can actually be brief about the taste. This is not a beer with complexity, you can clearly taste that a relatively large amount of hops must have been used, because there is sufficient bitterness present. Furthermore, the beer contains a number of flavours that benefit the freshness of the brew. A bit of citrus, apple, lime.

This beer is marketed as a thirst quencher that you should always be able to drink and it does that job very well. This beer lacks the depth and complexity that you want when you want to really want to take your time to enjoy a brew, but that is not the intention. We noticed ourselves already that in order to quench our thirst we would go take a Ramon more easily than an alcohol-free lager, simply because it tastes just that little bit more special. It makes no sense to make to much fuzz about the taste of this Ramon. It is a beer that is made as a thirst quencher, even a sports drink and it just fulfills that task perfectly.