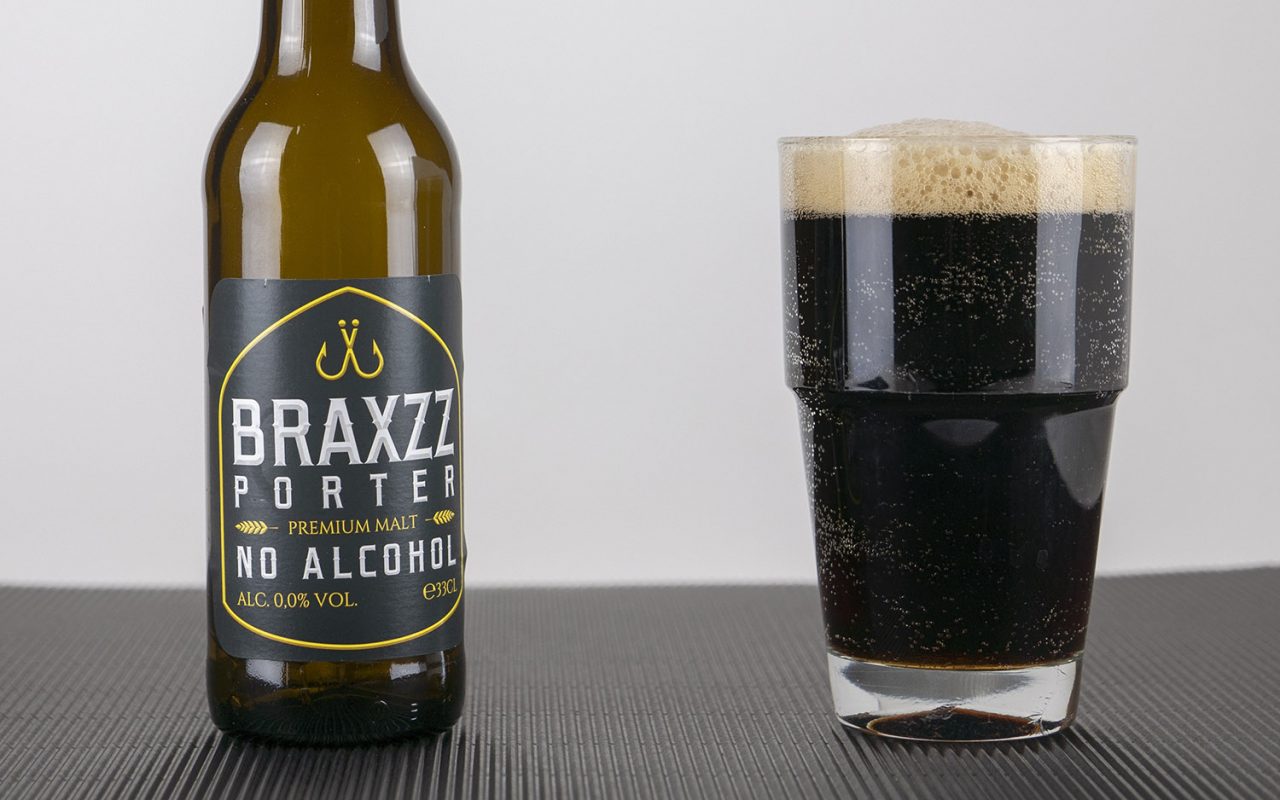 This Braxzz Porter is, after two IPAs and the Braxzz Tripel, the fourth beer of the Dutch brewery that will undergo a taste test. This Porter is the last in the line of their current range that we still have to taste. At Braxzz in Amsterdam they brew, as you can read here, only non-alcoholic beers. In addition, they currently have an alcohol-free Cider in the range, which we will soon taste.

If you are not really familiar with beer terminology as used by notorious beer connoisseurs, chances are that you do not know what a porter exactly is. You really don’t have to be ashamed of that, because even among the experts there is quite a bit of discussion about it. We can easily fill half a website with different theories about the origin of the porter, but we won’t bother you with that. Depending on the source, the porter finds its origin in London or Dublin. In London it is told that he was first served by some bartender who mixed different beers to make a porter. The other version is that it was first brewed for the workers in the port of Dublin (porters), to keep them strong.

The porter was initially a beer with a relatively low alcohol content. Afterwards, more powerful porters were made under the name Stout Porter and so the stout was born. For a long time the difference was that the porter used malted barley and the stout roasted barley. Nowadays, the differences have faded and the porter and stout are almost the same beer styles. Some characteristics should always be found in the beers. They must be very dark, almost black. When tasting, you should find the taste of chocolate, caramel and coffee. If there should be a difference, a porter should be slightly less bitter than a stout. The beers must have a medium body and not contain too much carbonation. So let’s get started with that and see if the Braxzz Porter fits in.

When opening the Braxzz Porter we are immediately confronted with a very dominant aroma of coffee. If you let people smell blindfolded, we are almost certain that a few would think that we have pushed an espresso under their noses. In addition to the smell of coffee, we also smell a little sweet vanilla and a portion of malt. When pouring the beer, do it firmly if you want enough foam. That foam is immediately the biggest downside of this porter. In the first instance, it is there (when you firmly pour the beer), and it has a beautiful dark beige color. However, it is slightly less sturdy than we expected and it disappears like snow in the sun on a hot summer day. That is a shame, because a black drink without foam will soon look like a coke.

By swirling the glass a little, a bit of foam reappears, which makes drinking a bit more pleasant. When tasting, the slight disappointment about the appearance is quickly washed away. The Braxzz Porter is a real taste bomb. Much has to do with the very dominant taste of espresso, but that is not all. The porter is a bit sweet due to the presence of the vanilla, some chocolate and caramel and has quite a few bitters in store that seem to come from chicory. At the end you will find a few notes of dried fruit.

The mouthfeel is almost as it should be. There is not too much carbon dioxide present, but the body could have been a bit fuller. The Braxzz Porter is not watery, but a slightly firmer impression would have been nicer. In the aftertaste, the strong coffee flavor and the bitter of the chicory remain. It’s really like you’ve just had a cup of espresso. To know more about the taste of this coffee we could actually use the judgment of a barista, but as a beer and coffee lover, we can really appreciate this Porter.

We went looking for how a porter should taste and tested the Braxzz Porter against that profile. The Braxzz Porter passes that test quite well on most points. The Braxzz Porter is suitable for people who like a lot of strong flavours and who appreciate the taste of strong coffee. If you are a beer and coffee lover, you should definitely give this Braxzz Porter a try. If at Braxzz, they can ensure that the foam is retained a little longer and the body becomes slightly fuller, this would be a real winner.