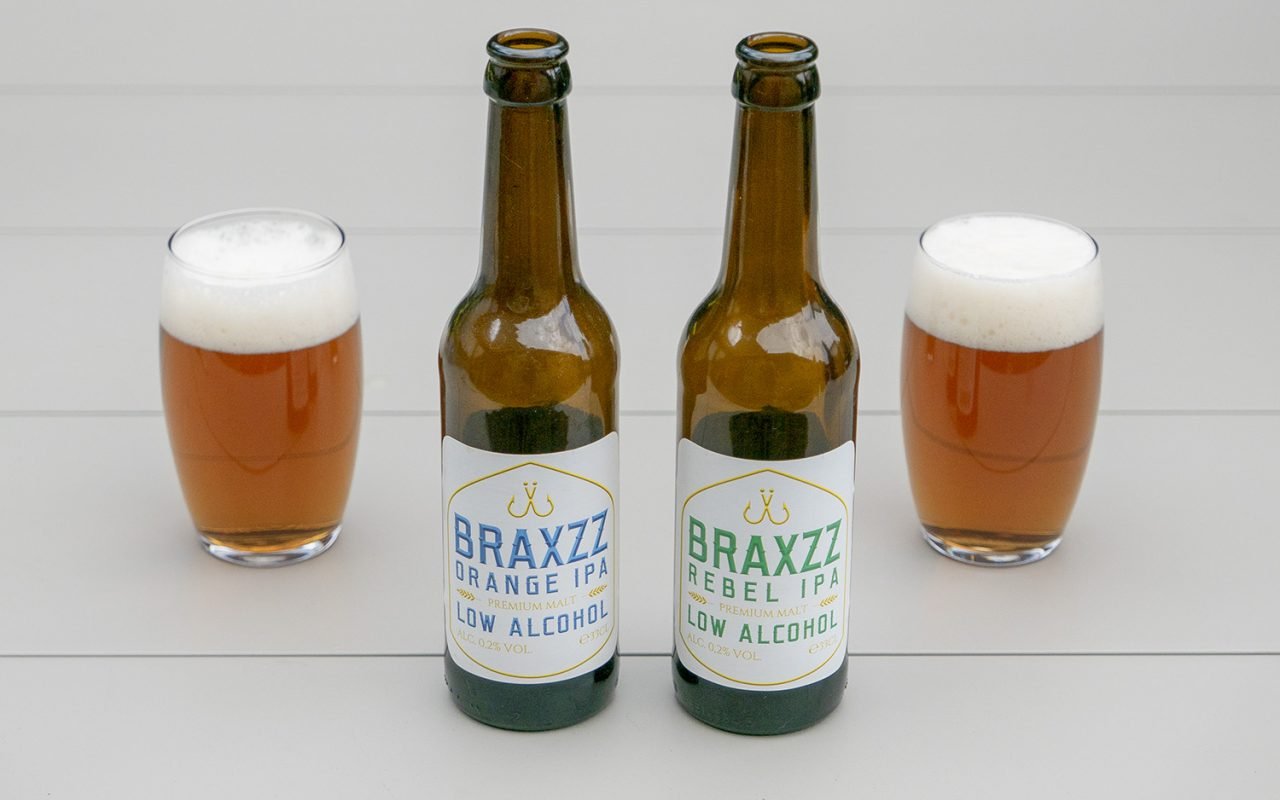 You can read the history of Braxzz, a Dutch brewer who only makes non-alcoholic beer on this site. Now we want to test two beers from the Amsterdam based brewer. The Rebel IPA and the Orange IPA are two Indian Pale Ales. The Orange IPA is based on American IPA’s. It is rich in hops with hints of herbs and grapefruit, not bitter in aftertaste. The Rebel IPA is based on English IPA’s. This one must be a bit more bitter and has an aroma of flowers. We tasted the two next to each other to clearly taste the differences.

It is clearly noticeable that both beers come from the same brewer, since they have many common characteristics. For example, both are not very rich in carbon dioxide, which means that they do not really sparkle exuberantly, but rather wait calmly in the glass to be drunk. Because there is not a lot of carbonic acid present, the otherwise beautiful, white foam head disappears relatively quickly with both beers. This makes the two amber beers look very similar to each other.

The Orange IPA smells very spicy with a bit of tropical fruit in the background. When we taste the Orange IPA, it is immediately noticeable that there is a very prominent fruit flavor. The orange and citrus perfume present in this Orange IPA is somewhat reminiscent of a perfumed potpourri. Someone who is fond of the taste of southern fruits will certainly appreciate this, if you are not a fruit lover, you may not be very fond of this Orange IPA. Despite the presence of the many fruits, this Orange IPA never tastes sweet. The abundance of hops ensures that the beer tastes relatively bitter while drinking. The aftertaste of this Orange IPA is mainly the taste of fruit, the bitterness disappears relatively quickly.

The Rebel IPA smells a bit sweeter than the Orange IPA. As promised by Braxzz, it also smells a lot more flowery. This Rebel IPA is a lot softer than the Orange IPA. If you drink them next to each other, it looks like this Rebel IPA doesn’t have that much taste, but that’s not true at all. With the Rebel IPA, the sting is in the tail. When you are drinking it you do indeed taste flowers with a slightly hoppy undertone. It is only a few moments after drinking that the real power of the Rebel IPA becomes clear. The aftertaste of this beer is extremely bitter. Very suitable for lovers of a bitter, perhaps a little too much for those who don’t like bitters. The Rebel IPA is therefore also a real taste bomb, especially a few moments after you swallowed the beer.

Which one is the best?

Which of these two IPA’s from Braxzz is the best depends entirely on your own taste. Although the two are IPAs and they both come from the same brewer, they are, apart from their appearance, two completely different beers. If you love the perfume of orange and grapefruit you should definitely opt for the Orange IPA. If you prefer to drink a bitter beer, you can’t go wrong by ordering a Rebel IPA. Both beers have been brewed correctly and will not disappoint the non-alcoholic beer lover. Because of the rather complex taste, neither of the two beers invite you to drink them very quickly. This makes them extremely suitable to enjoy them very at ease. We might have been even more happy with a little more carbonic acid present in the beers to have a slightly more pleasant mouthfeel, but that too is a purely personal preference.