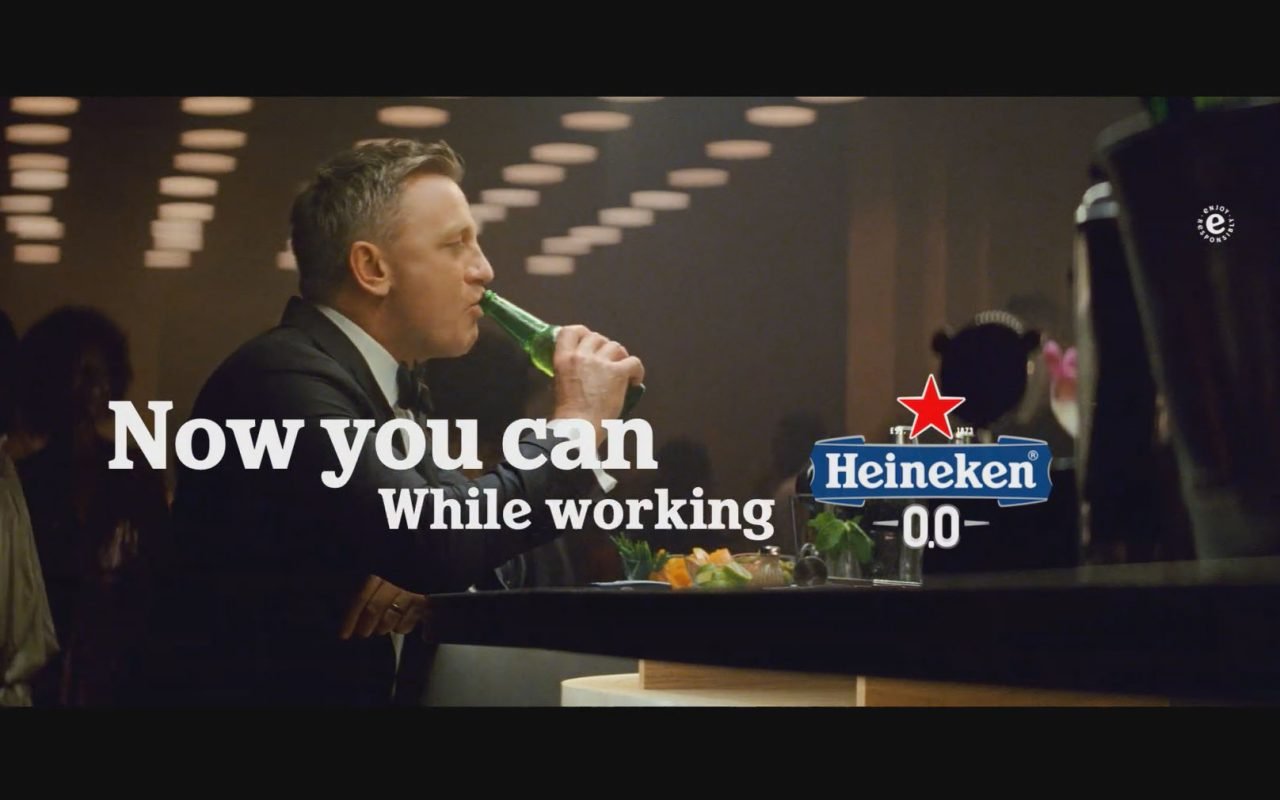 Some time ago we were talking about James Bond at soberito when we made an alcohol-free version of the cocktail that 007 drank originally, the Americano . The world’s best-known secret agent is now ready for a new assignment in the film no time to die , which will be screened in the cinema in April. Surprisingly, in that film James apparently renounces the Americanos and Martinis (shaken not stirred), and trades them in for an alcohol-free alternative.

Since a few years, Heineken has been investing quite a few euros or dollars to sponsor James Bond. The film no time to die is the eighth film in which an occasional Heineken gulping James Bond can be seen, or where, in addition to the film, advertisements can be seen starring Heineken and James Bond. However, it is the first time that James Bond sips the non-alcoholic version of the beer, the Heineken 0.0.

The new commercial that can be seen on TV can be viewed below. The commercial is also good for a lot of speculation on fan sites of the secret agent. Daniel Craig, for example, wears a wedding ring in the commercial, which could indicate that James Bond will marry in the movie. This is questioned by others. According to them, Daniel Craig is shown as an actor in the commercial, not in the role of James Bond. And since Daniel Craig is married, he wears a wedding ring. Anyway, we certainly like it that alcohol-free beer is put in the spotlight in this way, it can only be good for the popularity of AF alternatives..

In the short version of the commercial you see a bartender preparing a cocktail for James Bond, who apparently had ordered a double O. When he gives that double O to 007, he refuses the drink and points to the Heineken 0,0 (Double O), saying “I’m Working”.

No more room for alcohol while he is working for the new James Bond. Since we have always assumed that 007 was always working, even when he shares a bed with the umpteenth Bondgirl, we can safely say that James will not touch much alcohol anymore.

Not the first big name

It is not the first famous person that appears in a Heineken campaigns. Earlier there was a commercial with Formula 1 legends, in which Jacky Stewart, Nico Rosberg and David Coulthard refuse a Heineken with alcohol because they still have to drive. Heineken is also affiliated as a partner to the Formula 1 and the Uefa Champions league, where they also mainly promote the 0.0.