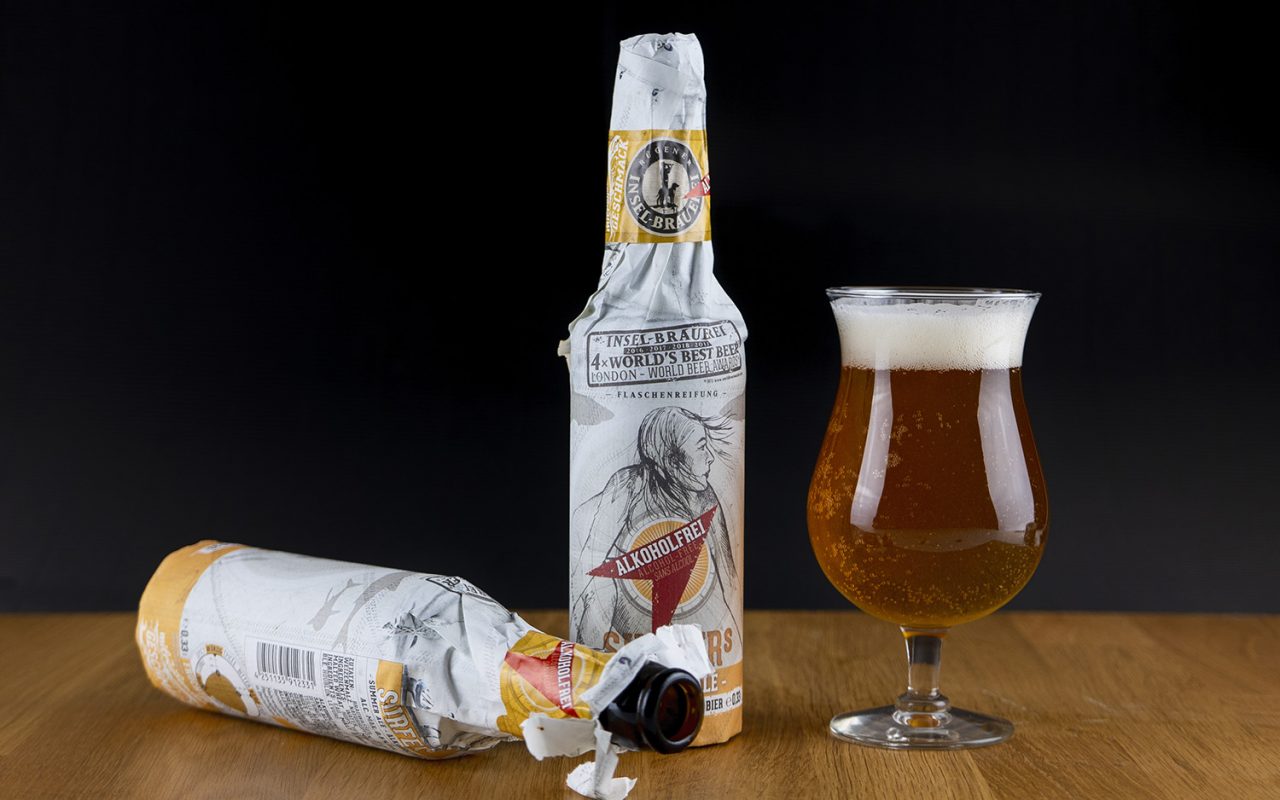 The island of Rügen is located in the north of Germany, in the Baltic Sea. The brewery of this beer opened its doors in 2015 and is therefore relatively young. It is starting to become a common thread throughout the story of non-alcoholic beers. New, modern breweries apparently find it easier to take the step to producing non-alcoholic beers. The Rügener Insel-Brauerei, that is the name of the brewery of this beer, is no exception. Among the 19 different beers brewed on the island of Rügen, we find no fewer than four alcohol-free brews. Good news for enthusiasts. If they are tasty of course.

Putting a new beer on the market is not easy. There are thousands of beers available, so if you want your beer to stand out a bit, you should do something special. At the Insel-Brauerei all bottles are wrapped in paper. This seems like a good move from the marketing department, but it also has a function. By wrapping the bottles in paper, the beer is optimally sealed for light. This is necessary, because after the bottles have been filled and packed in paper, they move to a special ripening room. There they rest for a while to develop their full taste before being sold. During this process they must be protected from light, hence the special packaging. The paper also bears the FSC label, which guarantees that it is manufactured in an environmentally friendly way.

An island in the sun

Perhaps surfing makes you think of warm, sun-drenched southern beaches, where hip surfers conquer the biggest waves. But people also surf on the Baltic Sea. It’s always windy there, and in summer it can be nice and warm. The inspiration for this beer probably came on a day when the island was bathed in the sun, and the beaches were taken in by surfers.

The beer is golden and slightly cloudy. If we pour the bottle completely, it becomes even more cloudy and a little sediment floats in the glass, but not to the extent that it is disturbing for us. The foam is white and sturdy. It stays up long enough and never completely disappears. This keeps the beer looking nice and makes sure it remains pleasant to drink.

The Surfer’s Summer Ale smells fruity with some hops in the background. When we drink from it, that fruit flavour is certainly still present. We taste a little citrus, tropical fruit and some apple. We can also find some notes of grass and straw. A slightly hoppy taste, provides a quite subtle bitterness. Despite all these tastes, the beer is very well balanced, which is very good.

This beer has more than enough body, which ensures a pleasant mouthfeel. However, you must keep in mind that there is not very much carbon dioxide present in the beer. This, in combination with the smooth body, makes this a very soft beer. It does not invite you to drink very quickly, partly due to its full taste. In the aftertaste the bitterness of the hops comes up a bit more, and the bitterness also lingers long.

The Surfer’s Summer Ale is definitely a nice non-alcoholic beer. The flavours are well balanced, which means that no taste really stands out. This makes the beer very pleasant to drink. Don’t be put off by the name. Due to its soft taste, this Summer Ale is also good to drink in the winter. The beer can also be enjoyed when it is served slightly warmer. We really can’t find many negatives. The only small negative point could be the little sediment is floating around in your beer when you don’t like that.