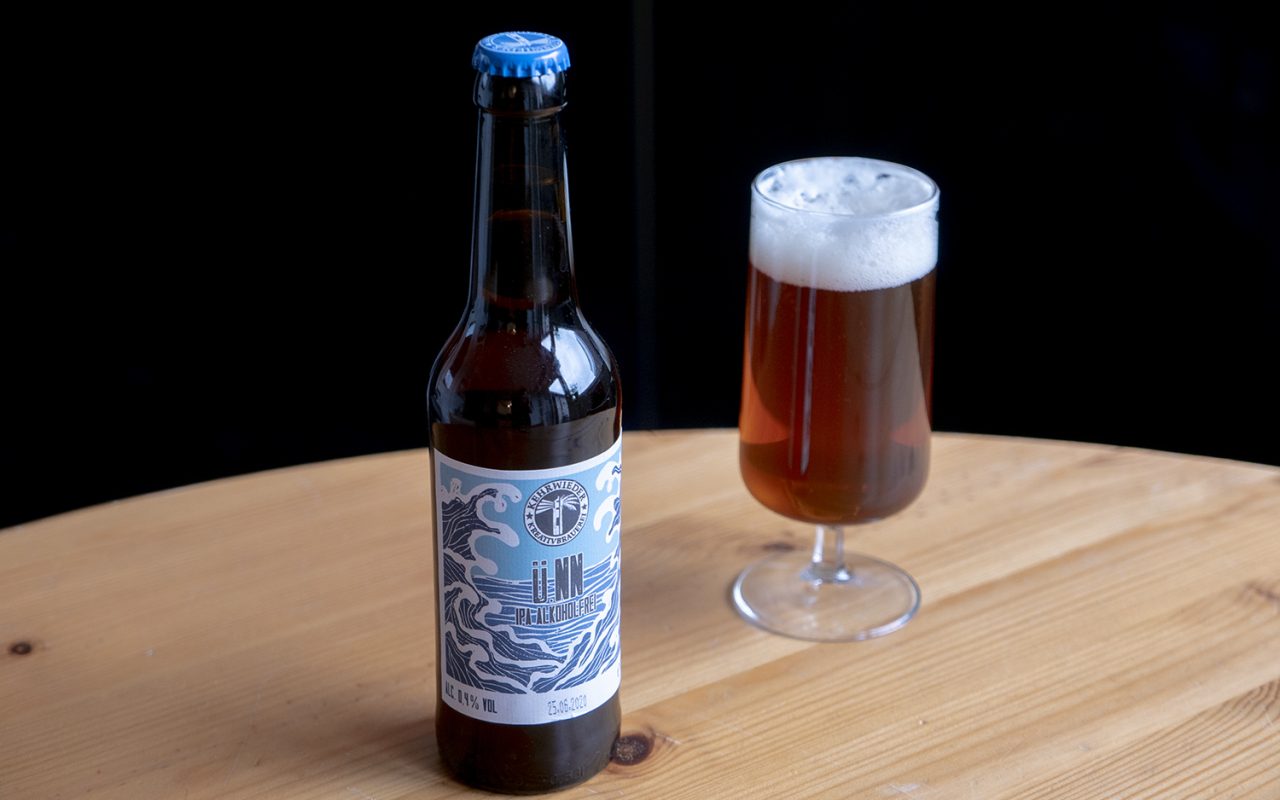 Kehrwieder is located in Hamburg. The first beers of Kehrwieder were brewed in the brewery of friends. Since 2014, they have their own brewery in Hamburg. The name of the brewery comes from the harbour. Skippers who left the port of Hamburg were traditionally waved goodbye with the greeting ‘kehrwieder’, which means ‘come back’, to wish them a safe trip, but more importantly, a safe return home. The Kehrwieder kreativbrauerei, that is the full name, brews eight beers that are always in the range and about the same amount of seasonal beers, which are available a few months a year. Between the core range of eight beers we find two non-alcoholic beers, the Roadrunner, an alcohol-free stout, and the ü.NN (über Normal Null), an alcohol-free IPA. We tasted the latter.

An IPA is usually characterized by a high bitterness. When we smell this ü.NN, we especially notice the smell of fruit. A bit of citrus, but especially a lot of tropical fruit such as melon and mango. You can also smell a little hop and malt, but it is still dominated by the somewhat sweet, fruity scent.

With such a fruity scent we are always a little alert, sometimes it is a harbinger of a very sweet brew. However, we can immediately say that this is certainly not the case with this Über Normal Null. The fruit taste is very prominent, also during the tasting you mainly taste tropical fruits, but in our opinion the beer is certainly not too sweet. This is probably the least bitter non-alcoholic IPA we have drunk, but the bitterness is certainly present. In the aftertaste, this bitter taste even easily dominates the sweeter, fruity aftertaste.

The beer looks relatively dark orange, the foam layer is light beige. The foam lasts for a relatively long time, which is always pleasant. There is a little sediment in the bottle, the choice is whether or not to pour it into the glass. If you do, the beer will become a bit more cloudy and the taste a little softer. The ü.NN also has a good mouthfeel. It is a beer with sufficient body, certainly not watery, but also not viscous. The ü.NN does not exuberantly sparkle, but there is certainly enough carbon dioxide present to experience a pleasant fresh mouthfeel.

This IPA is among the least bitter IPAs that we have already tasted and has a very fruity taste. The beer is therefore ideal for someone who does not like a lot of bitterness and who appreciates a slightly sweet touch. This beer is certainly not too sweet, the sweet taste that you taste also seems to come from the fruit and not from adding a lot of extra sugars. It is certainly a nice beer to enjoy at ease, because the bitterness that is present does not invite you to drink the beer very quickly as a kind of thirst quencher.