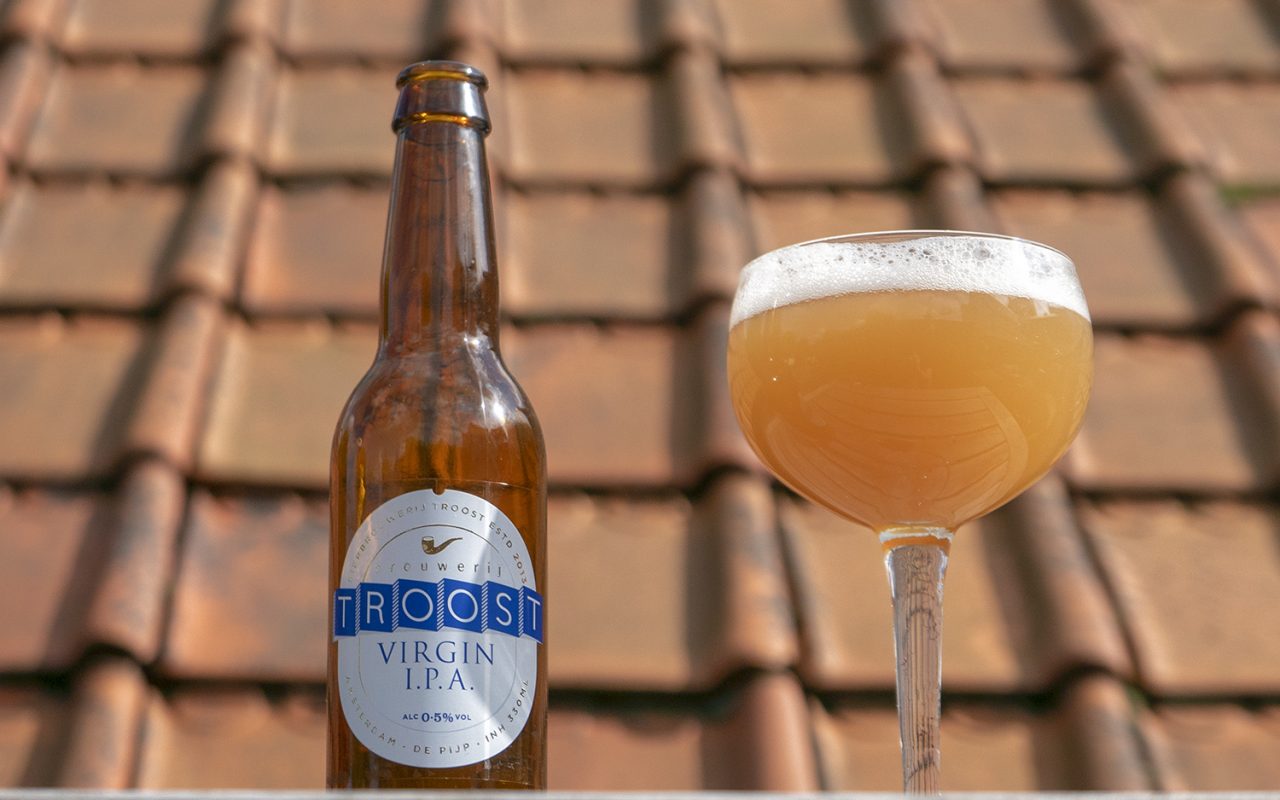 Brewery Troost is a relatively new brewery, which started in 2013 in Amsterdam. In those five or six years, they already brew twelve types of beer, including one alcohol-free, the Troost Virgin IPA. A nice thing about the brewery is that the company tries to work as biologically and ecologically as possible. From the residual products left behind during brewing, bread is made that they serve in the brewery to to accompany a tasting plate. The car fleet runs on biological gas and the steam from the cooling water is recycled. In addition, brewery Troost employs some people who normally would have a hard time finding a job.

We wanted to taste the Troost Virgin IPA. Before we poured the beer, we could already see that there was quite a bit of sediment in the bottle. One of our two bottles stood straight in the refrigerator, the other lay down. In the bottle lying flat there was a lot of sediment on the rim of the bottle, so we opted to taste the upright bottle. If you do not want the sediment to end up in your glass, you have to pour very very carefully and leave a bit of the beer in the bottle, which is a shame. However, we want to taste everything and pour the entire bottle into our glass. The sediment ensures that the beer becomes very cloudy and not transparent at all. The view is reminiscent of a very turbid white beer with a little sediment floating around here and there. The foam head is clear white, but not really sturdy. After a few seconds it disappears, which really is a pity.

When you smell the beer, you immediately know that you are dealing with a very bitter beer with a lot of hops, which is normal for an IPA. Yet after smelling we can already suspect that this will be a very bitter one. We get the same in the tasting. The Troost Virgin IPA is perhaps the bitterest alcohol-free IPA that we have already drunk. The fact that a lot of carbonic acid is present provides an extra fresh touch and certainly does not camouflage the bitterness. You can taste some tropical fruit (pineapple and mango) in the background, but the hop taste is very dominant. In the aftertaste the bitterness disappears a little bit and the fruit flavours come to the front.

The appearance of the Troost Virgin IPA is a bit disappointing. You may have to pour this beer with extreme care, so that none of the sediment ends up in the glass, but that cannot be the intention. Once everything is mixed in the glass, you get a very cloudy, not really nice-looking beer. It’s even more sad that the head disappears very quickly. If you like a bitter hop taste and you don’t care about the appearance of your beer, you will certainly be able to enjoy this beer. If you are not so fond of bitter beer, it’s perhaps better not to drink this Troost Virgin IPA