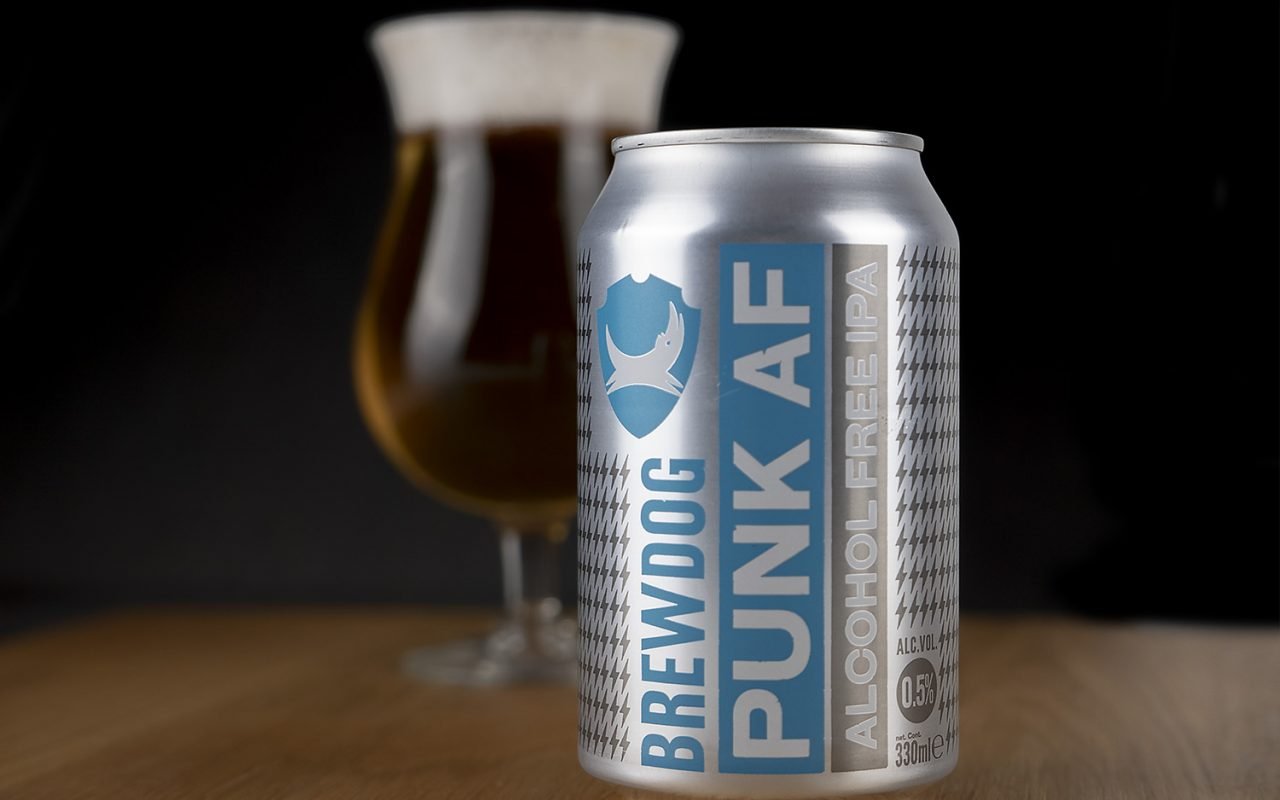 We don’t have to introduce Brewdog anymore. The originally Scottish brewery launched one of the first non-alcoholic specialty beers that really had a lot of taste in 2009, with the Nanny State . That beer convinced people that it is also possible to make great beers that do not contain alcohol. The fact that Brewdog continues to use alcohol-free beers became clear when they opened their first alcohol-free bar in London in early January 2020. In the meantime, a number of other non-alcoholic beers have been added to Brewdog’s range. Today we taste the Brewdog Punk AF with great expectations.

The Punk AF is actually an alcohol-free brother of an alcoholic beer that they have been brewing at Brewdog for a while, the Punk IPA. This beer is still the flagship of the Brewdog brewery. For the Punk IPA, and of course for the Punk AF, all sails were set. No fewer than eight different hop varieties from North America, New Zealand and Europe are used to brew the Punk AF. We do not have the habit of listing all of these, since that is stuff for the true connoisseurs, but in this case we make an exception. The Punk AF is hopped with four types of hop, the Simcoe, Chinook, Mosaic and Nelson Sauvin. The beer is then dryhopped with Ahtanum, Cascade, Chinook, Citra, Huell Melon and Simcoe. In addition, four types of malt are used. A beer that is made as a punker makes music. Give it everything you’ve got and make as much noise as possible. The question remains of course whether this abundance of ingredients can get nicely balanced.

The can states that we can expect tropical fruit, mixed with tones of grass and pine. When smelling the beer we can indeed find some tropical fruit, lots of hops and hints of grass and pine. So far everything goes according to what’s mentioned on the can. When we taste the beer, the bitterness of the Punk AF is crazy. We were initially a bit blown away by it and could not really taste much of the tropical fruit through the bitterness of the hops. The second sip, we held in the mouth a little longer, and then all the flavours of the Punk AF can truly be noticed. We therefore recommend that you drink this beer calmly and give the flavours time to overcome the bitterness. During that second sip, the Punk AF remains bitter, but we can indeed taste the tropical fruit. If you hold the beer in your mouth for a little longer, you will also feel that the taste buds on your tongue are woken up by the bitterness and a kind of roughness for which the pine flavour seems to be responsible. To stay in the punk scene: it is as if the Sex Pistols drummer is pounding a drum solo on your tongue. Right in your face, this Punk AF. Strange but true, with every sip the beer seems to become a little less bitter and the fruit taste comes up a bit more, which makes it much more enjoyable than we initially thought it would be.

You get a nice-looking, golden-yellow beer with a very light beige foam head. It is a pity that it disappears relatively quickly, because you want to enjoy this beer a bit longer and after a few minutes it looks a bit sad without foam. The mouthfeel also contributes to the roughness of the beer. Not watery, but it might have had a little more body. Carbonic acid is sufficiently present and functions as a kind of extra drumstick with which the drummer can ravage your taste buds a little more.

There is no doubt that this Punk AF is very well made. But there is also no doubt that this beer will not be appreciated by everyone because of the bitterness. With this Punk AF it is therefore fairly simple. If you like bitters, it is quite possible that you reserve a shelf in your fridge to stock the Punk AF. If you are not a fan of an abundance of hops, you may not appreciate this beer. But even in the latter case, you should actually try a Punk AF, if only to know what it feels like for your taste buds. With this beer, we cannot imagine that anyone who drinks it will miss the alcohol, therefore it is too full of flavours.