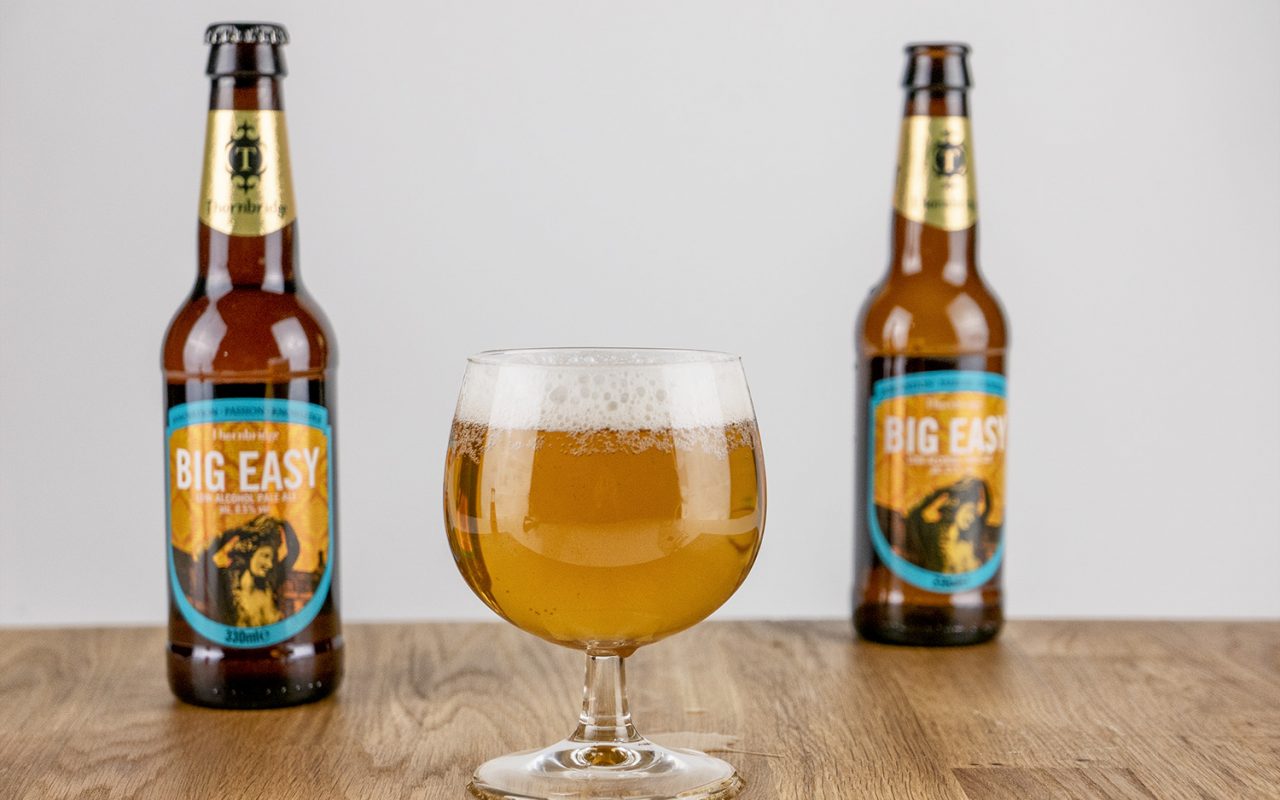 The Thornbridge brewery is situated in heart of England, in the middle of the Peak district. If you look at the bottles and you see  the castle where the brewery is located on the website, you would suspect that this brewery has an age-old tradition. However, this is not the case. The brewery was founded in 2005, when Jim Harrison and Simon Webster hired two young brewers to help them set up a brewery. Thornbridge grew steadily, moved to new buildings in 2009 and is now brewing fifteen beers. Since 2018, there is one alcohol-free beer among those. Of course we wanted to taste that.

No foam, lots of taste

When pouring the beer, it is immediately noticeable that very little foam is present here. The foam also disappears at lightning speed. We really have to hurry to be able to make an picture where there is still a bit of foam left. A shame. The beer looks nice golden yellow, but due to the lack of foam, it soon doesn’t look like a beer anymore. We try a few more bottles and pour really hard, but we don’t really get a better result.

On the bottle we read that two types of hops were used for this beer: Cascade and Amarillo. They should ensure that a bouquet of lemon, peach and apricot is created. We smell our glass and can indeed find a fruit smell, but it is not overwhelming. When smelling, it is the sweet apricot and peach that come forward, the lemon we can find in the background.

When we taste it is striking that there is not really much carbonic acid present, which we also expected because not much foam was formed. That does not make the beer very pleasant to drink. The mouthfeel is a bit watery. Perhaps this is normal for an alcohol-free Pale Ale, but they have solved that issue better at Big Drop with their Pale Ale, by adding lactose to get more body.

However, the most important thing is the taste of the beer. And this Thornbridge does have taste. We feared for a sweeter beer, judging by the smell of peach and apricot, but the Thornbridge Zero Five (or Big Easy) is nice and bitter. The mouthfeel may be a bit watery, but you are not likely to drink it as if it were a glass of water, therefore, it is too bitter. In addition to the bitter hop taste, you can certainly also taste the apricot and peach, the lemon stays a bit in the background. These fruit flavours never make the beer sweet and the bitterness of the hops continues to dominate. At the last gulps nothing of the foam remained on the beer and that is really the biggest disadvantage of this Thornbridge.

The taste of a beer is of course the most important thing, but the eye also wants something. We found the lack of foam at this Thornbridge a big problem. Feel free to taste it if you enjoy a bitter beer, because the taste is really ok. Due to the looks and mouthfeel, we have to conclude that there is still room for improvement in those areas.